Davos: No room at the table for women – literally. 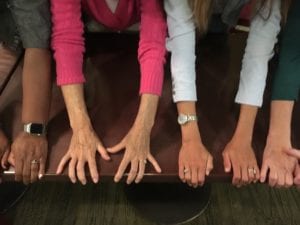 We’re not leaving the table!

The Washington Post reported on January 18 that two women at Davos who were scheduled as panelists–already a small minority–were not seated at the panelists’ table because there was “not enough room.” They were told to sit in the audience instead.

It’s hard to know what I would have done if I’d been in their position. Usually, I get to a speaking engagement inordinately early, so I imagine I would have sat down at the table before anyone else got there. I imagine that the only way I would have left is if they peeled my cold, dead fingers off the table.

All conference organizers need to schedule diverse panelists. The men at the table need to be allies and insist the women sit there. And sometimes, we just have to refuse to move!